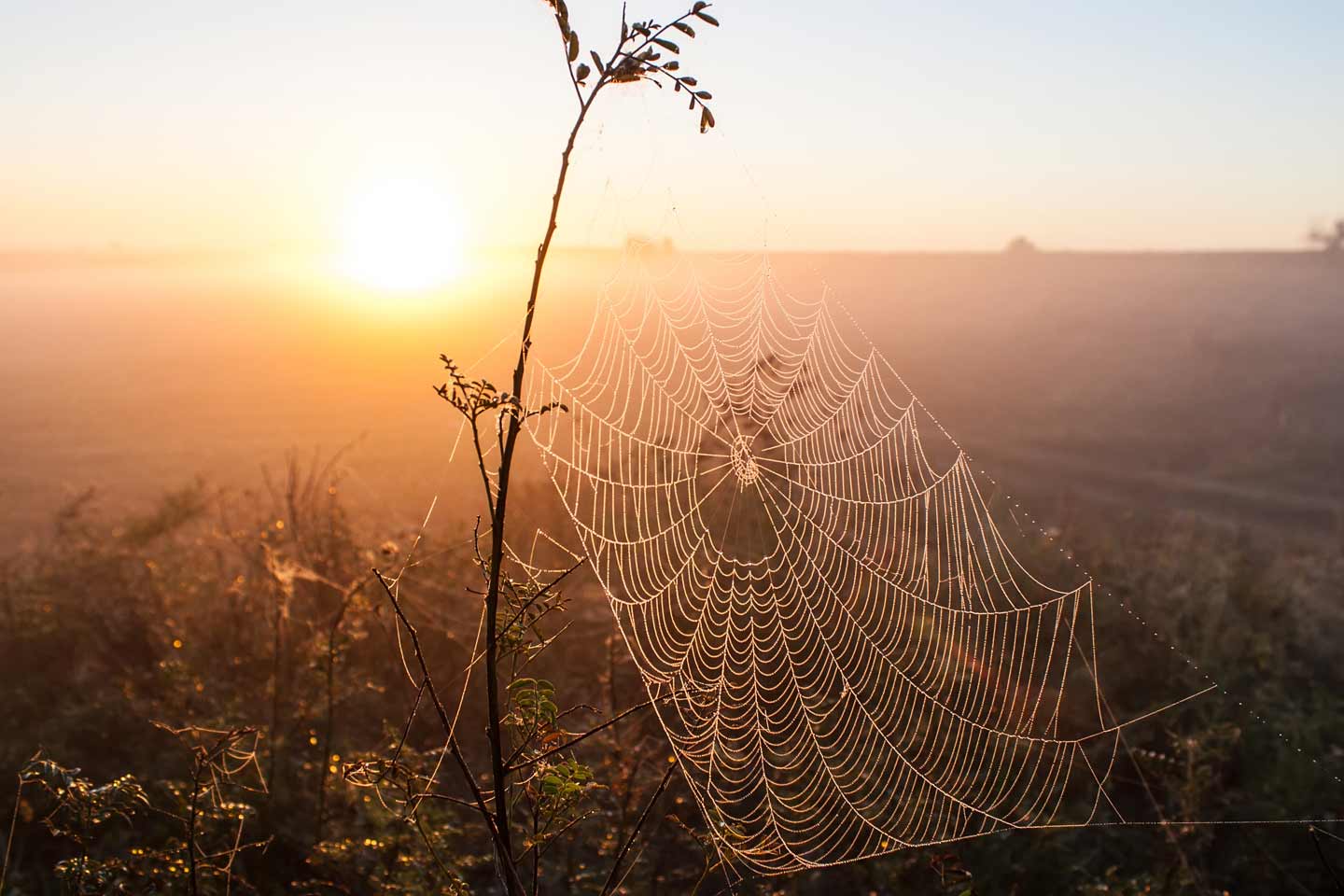 Spiders can be scary creatures, but they also have special abilities that make them seem like eight-legged superheroes. In fact, they're truly marvels of nature. Even if you'd rather not have them in your home, it's easy to respect their fascinating abilities. So if you've ever wondered about spiders and what they do as they hang out around your home, here's a list of 5 surprising spider superpowers.

Spider silk is what spiders use to build their webs, trap prey, jump from one area to the next, and create shelter. The sticky droplets on spider webs help catch prey like flies and mosquitoes in mid-air. It's also one of the most versatile materials on the planet. Made from proteins and spun through organs inside their bodies, the silk has extreme strength, stretchiness, and energy-absorbing capacity. The web spiders produce an engineered structure built through dynamic interactions between its proteins. This design gives their webs incredible strength and durability even when stretched to many times their original size.

Recently, scientists examined the silk of a brown recluse spider. They found that each strand is made up of thousands of nano strands, only 20 millionths of a millimeter in diameter, and is 1000 times thinner than human hair.

Despite it being so thin, it's stronger than steel and tougher than Kevlar, which is the material used to make bulletproof vests. It also has been used for medicinal benefits for centuries. In addition, researchers have considered incorporating spider silk to create a biodegradable mesh that can accelerate tissue growth.

Spiders are also great actors. Ant mimicry or myrmecotrophy is an interesting phenomenon in the insect world, intriguing many biologists. As odd as it may seem, certain species of spiders (300 to be exact) disguise themselves as ants to escape from predators.

You may be wondering how this is possible since spiders and ants have different body shapes and the number of legs. For spiders to mimic ants, they lift their two front legs to appear like an antenna while walking on six legs. They also take winding trajectories of about five to ten body lengths, making them look like ants following pheromone trails. This is the perfect way to hide from predators while hunting for ants for food.

As a remarkable adaptive evolution, several other creatures use protective mimicry, including moths, snakes, fireflies, and more.

Not only can spiders create strong and versatile webs and mimic ants, but certain species also have superior vision that allows them to see in the dark to stock and hunt prey. In addition to having top-of-the-line night vision, they also can see through UVA and UVB rays. Their superior vision comes from having four eyes close together in a row. They have two large principal eyes and two small lateral eyes. The retinas in their principal eyes consist of four distinct photoreceptor layers, with the two layers close to the surface containing ultraviolet-sensitive pigments and the bottom layers containing green-sensitive pigments.

They can see in eight different directions at once, knowing which way is up and what direction they are going by looking for light sources, a skill that has been dubbed as "parallel processing."

They also have a high degree of hearing due to the large sensory organs on their abdomen called pedipalps. When threatened by predators, they release venomous toxins that paralyze prey.

Spiders are natural artists, weaving their webs to create unique pieces of art. But, like a snowflake, no two webs are the same. They all vary in size, texture, and shape depending on the species and their hunting method. Webs also vary based on the type of spider that is weaving it. For example, when you see the common circular web shape, that design was made by an orb spider.

Other types of spiders may weave fuzzy-looking webs or funnel-shaped webs. There are even certain types of spiders in the world that will band together as a community to make massive webs that can cover several trees at a time, and then they share the food that is caught in the community web.

The fifth superpower? They're considered superior long jumpers. Jumping spiders are capable of jumping up to 50 times the length of their body. Now, if you were to watch one of these spiders jump, it might not seem like it's actually jumping that far from your perspective. But that's just because spiders are a lot smaller than we are, so the length doesn't seem as impressive. But think about it this way - if a 5-foot tall human were to jump 50 times the length of their body, they would be able to jump an impressive 100 feet.

They also have insane speed when it comes to hunting for food or escaping danger. When a spider feels threatened, its instinct kicks in, and it can move at incredible speeds without much effort.

Getting Rid of Spiders With Professional Pest Control

Even with these surprising superpowers, it's normal not to want spiders crawling around your home. They reproduce quickly. In fact, they can lay up to 1,000 eggs. They can also crawl through the tiniest of cracks and crevices in walls, floors, or ceilings. Although the poison used by spiders is not fatal to humans, it may cause nausea and other side effects, so it's understandable if you want to eliminate them from your home.

There are certain preventative measures you can take to prevent a spider infestation. For example, make sure to vacuum, sweep, and dust on a regular basis to prevent webs and eggs from gathering. However, sometimes you need the help from a professional pest control company.

Through highly effective pest control treatments, you'll be able to prevent and control spiders from taking over your household. Aptive Environmental offers pest control services with offices all over the United States. We are so confident in our services that if the pest we exterminate comes back, we will too at no additional cost.