What Are Blue Mud Dauber Wasps? 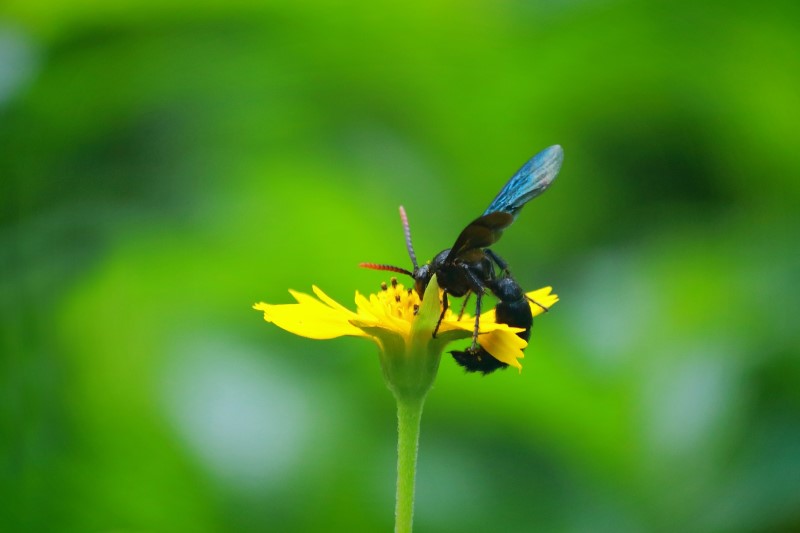 That metallic blue wasp you saw that made you wonder if a sting from it would turn you into Ant-Man’s partner? That’s a mud dauber—a.k.a. Chalybion californicum—and there’s no reason to be scared of it. It’s a generally calm, non-aggressive insect whose behavior is just as fascinating as its look.

What Are Blue Wasps?

The blue mud dauber is only one species of mud dauber. Other species feature different colors—including black and yellow—and patterns.

The blue mud dauber is not a social wasp—each female builds its own nests so you’ll never accidentally surprise a whole swarm of mud daubers.

These insects build a new nest for each egg. Blue mud daubers usually take over nests that were already built by the black and yellow species instead of creating their own.

Adult mud daubers feed on the nectar of flowers, pollinating as they move from plant to plant. However, their larvae need protein-rich food sources. Like other mud daubers, the blue species captures spiders to feed to their young. Blue mud daubers primarily hunt black widow spiders (another reason to be more thankful than frightened).

One sting from the wasp permanently paralyzes the spider. The insect then places each spider in its nest and lays a single egg on the last one, before sealing the entrance. The larva soon hatches and eats the spiders until it’s old enough to find its own food.

Luckily, female blue mud daubers spend their hunting energy on spiders and are not typically aggressive toward humans. These wasps prefer to attack prey that they’ll be able to use as food for their larvae. Males of this species can’t sting at all.

Of course, you shouldn’t do anything that might threaten a mud dauber or its nest. Like yellow jackets, these wasps can sting multiple times. Mud daubers’ venom is not dangerous to humans but a sting can be temporarily painful. It’s best to avoid them and consult a professional if you find a nest.

If you are stung by a mud dauber, ice and cool water can help reduce pain and swelling. Most mud dauber bites are mild and the symptoms don’t last long. You can also use a pain cream or anti-irritation lotion to control itchiness. If you feel dizzy or if you have trouble breathing, get medical help right away. Be especially cautious if you know that you’re allergic to wasp stings.

What to Do If You Find Blue Mud Daubers

Blue mud daubers tend to build nests on walls and under roof overhangs, often putting them in close proximity with people. Despite the low risk of stings, they’re usually unwelcome guests. Their nests are unattractive and it’s better to keep them away from children.

If you see mud daubers or their nests around your home or garage, call Aptive Environmental for a customized pest control solution. We use only effective techniques to control infestations and ensure that your property is defended from pests all year. You can count on our pest experts to target the pests that are most active in every season and keep your home protected.

Call your local branch today for a free quote and to schedule your first service appointment.